Boobie Bracelets. . . Are They Offensive? 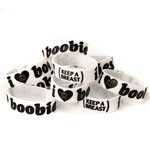 I have referred to my breast's as "boob's" for years never thinking anything of it.  In my book Breastless in the City I used that word quite often.  For me it is just a way to lighten up things when talking about breast cancer.  I certainly didn't think it was an offensive term.  Apparently to some it is.
Have you heard about the awareness bracelets that recently made the news and the school that banned them?  Keep A Breast is a non profit raising awareness about breast cancer and they are selling bracelets that say "I love boobies".  There is a middle school in Santa Clara, CA where some of the students are wearing these bracelets.  It is causing quite the ruckus.  The school administrators have banned wearing the bracelets even though they admit to being in support of the cause.  The female students were getting harrassed by the boys over the bracelets.
Middle school is such a young age and I wonder  whether or not they even get the point of the bracelets or just find it humorous especially since the wording on the bracelets is poking humor at the issue.  Apparently the female students were getting harrassed by the boys over the bracelets.  Personally I am not offended by the bracelets.  I am not sure though if it warranted banning students from wearing them.
Read the story here.
What do you think?  Did you hear about this story?  Do you think the bracelets should have been banned?  Do you find them offensive?
Posted by Cathy Bueti at 12:51 PM