Secretly Wishing You Had Breast Cancer??? 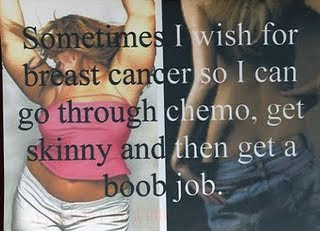 This picture is from Post Secret.  My first thought was WTF?!!  And then I got angry.  As a breast cancer survivor I am especially appalled that any normal healthy person would ever wish for a disease that is killing young women!  Breast cancer is NOT the way to get skinny and get a boob job!!  How about trying diet and exercise!  That is the healthier way to go about it without risking death!
I had a mastectomy and TRAM flap reconstruction where they took a piece of belly fat and muscle to make a new breast.  It was 10 hours of surgery that I was afraid I would never wake up from.  When I finally did I wished I hadn't I was in so much pain.  Although I joke about getting a "free tummy tuck"  humor is my way of dealing with the emotional pain and fear I live with as a cancer survivor.   I feel as though I have earned that right.
I think the person who wrote this should spend some time with chemo patients who are going bald, vomiting, in early menopause,  have chemobrain and then decide if breast cancer still looks enticing.  Then take a look at a young woman that has just had that so called boob job with scars, a fake nipple, and no sensation left in that breast and see what you think.
I would never wish breast cancer on my worst enemy nor would I ever wish it on myself.  Although I try to take away the positives from a bad experience like how stronger I am from having gone through it, a postive has never been my fake left boob or the huge scar running across my belly that I have to see every day when I look in the mirror.  A constant daily reminder of what was taken away because of cancer.
Have you seen this pic?  What do you think?  Does it make you angry?  What would you tell this person if you had the chance?
Posted by Cathy Bueti at 6:28 AM

This is the first I'm seeing this insanity. Someone actually wrote this??? I would like to think it was done as some ass backwards campaign about breast cancer awareness but that's me trying not to judge, trying to understand. Except in this case all I can say -- ad, or true....this is insulting and in very, very bad taste.

And I pray that this person never has to go through what we have in order to fulfill her "desires".

Sherry, that is a good word...insanity!! I saw this on a friend's FB page and couldn't believe it. It is from Post Secret which is now a book of compiled anonymous secrets that people sent in to the author. Don't know much more about it than that...so yes, someone sent this in as their "secret".

There are some crazy people out there! Really clueless!

Wow Cathy, What can I say you said it all and in the words I would have chose, actually you are me. WTF is right, I could give them a eye opener right know about that tram flap boob job, double that, how about both boobs, just finely finished getting those new nips, well you/we all know the rest of that story (not a pretty picture), people never cease to amaze me and even shock me, makes me ANGRY.
The person who wrote that should spend a lot of time with cancer patients.
Thanks for sharing your thoughts and life with us Cathy.

I will never understand why people in our society would even entertain the thought of something so ridiculous. Seriously, you wish you'd get breast cancer to improve your appearance? Are you prepared for all the sh*t that comes between being diagnosed and recovering? You know, little things like POSSIBLY DYING?!

If I ever met a female who had that mentality I just might fight her. Anyone who actually sees getting breast cancer as a means of losing weight and getting a boob job needs to a) be smacked around SEVERELY, and b) either exercise and lose weight (like you said) or save up and have some plastic surgery.

It's not the same issue, but about 2 months ago I rented a documentary called 'The Gift' about the gay community and how there are actually homosexuals who actively try to contract HIV so they won't need to worry about it anymore, and they can feel almost a sense of community. How crazy is that?!

I tell you, I just don't understand people sometimes.

I actually did see this on post secret. I was shocked of course but you have to understand that the person that sent it in is probably mentally ill.
She probably has an eating disorder, or some severe self esteem issues, therefore when it comes to weight and body image they do not see or think clearly and are willing to do ANYTHING that will help them lose weight, or get the perfect body.
They obviously don't know much about cancer and how hard it is dealing with it but they also have problems too, so I wouldn't judge her too harshly.

That is awful. I don't even know what else to say!